I concluded my last post by stating my next post would have something to do with Therapy, so here I am!

Ther-a-py : –noun, plural -pies.
1. the treatment of disease or disorders, as by some remedial, rehabilitating, or curative process.

2. a curative power or quality. 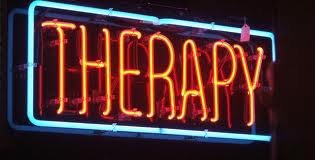 Writing, I have found, is very therapeutic. It is really the reason behind me even starting a blog, and although I have not been very religious in posting – often going months without putting hand to keyboard – I find myself writing in my head at times. Strange, but true. Conversations seem to flow so easily inside my head. Sentences rolling off my tongue without any hesitation, and they always make sense. I have often wondered whether this is some form of OCD? The fact that I run through entire future conversations, many I will never even have with people! Sound like I need therapy?

There are so many therapies in this world, from the many wonderful “natural” therapies to the heavy stuff ie. psychotherapy. I am impressed to say I have tried many! When my first marriage broke down (Who am I kidding? When I abandoned my first marriage), I agreed to go to counselling with the ex-husband. This was possibly the most frustrating and, in my opinion, pointless therapy I have ever taken part in. Frustrating because, being the partner in the equation who had already worked through my feelings, I found it hard having to re-hash them – but this time, actually being heard. And pointless because of what I just said – I had already made up my mind and didn’t want to have someone trying to coax me into changing it.

I then re-entered counselling a few years later when the aforementioned ex-husband was making my life rather miserable. This round of counselling was much more useful! Last year’s journey to a counsellor was for, what I thought, a pretty silly reason. Friendship issues. I found out pretty quickly, that this was NOT a silly reason. Many people seek help for these sorts of problems, generally because they are relationship issues! I think at times, we diminish the impact that our friendships have on our lives – until something negative happens, and we fall in a heap. One session of counselling managed to put a whole lot of worry in to perspective, and for that, I shall be eternally grateful!

And this year? Well, this year, we are beginning a whole new kind of therapy……something I certainly did not ever entertain the idea of, but have really had no choice but to jump in to. My youngest son has had some issues of his own, and we have now sought the services of a child psychologist. Sounds scary, but it really isn’t. She now has the title of “Worry Doctor”. My first hour with her, spent filling her in on his personality and what was troubling him, ended up being really helpful and eye-opening. The part where I had to go through family history – what a hoot!! And his two sessions with her since have been great. Things are looking up, and a whole new world is being brought to our attention.

So that’s my spill. Therapy. Whatever therapy you seek, it will be helpful. If it doesn’t solve your problems, there’s plenty of others to try! I’m now off to try another…..a couple of hours staring aimlessly at the television!

Ps. Another “Upside” to all this therapy? The reason I am not currently medicated! LOL